Cervical Cancer is a reality, it’s time for a Pap Smear

Let’s face it, none of us really want to go for a Pap smear. It’s way down on our list of entertaining activities, and so easy to postpone… well indefinitely. It doesn’t help that many of us think we are somehow exempt from risk, or may have encountered hostility to our sexuality from the medical profession. Media coverage about the importance of testing for LGBT women is scant and health care providers are sometimes well-meaning, but poorly informed. There are a zillion reasons why, as women who love women, we don’t get tested.

Wendy, 38, has been married to Amy for 5 years says. “When I was in my 20’s I was told, by a gynaecologist, that the only way to get HPV (the Human Papilloma Virus is responsible for most cases of cervical cancer) was from a man. Because of this, I didn’t go for a Pap smear until I was 38, when a close friend was diagnosed with cervical cancer.” Luckily for Wendy her test was negative and she now has regular Pap smears.

What is the HPV virus?

HPV is an extremely common virus and statistics indicate that 4 out of five people will have HPV at some point in their lives. The HPV virus is mainly spread through genital skin contact during sexual activity. This does not need to be penetrative sex and certainly includes sex between women.

Professor Lynnette Denny, Head of the Department of Obstetrics and Gynaecology at UCT, explains that “HPV is transmitted by skin to skin contact – so HPV on the fingers can also be transmitted as can oral-genital sex.”

HPV is an extremely hardy virus that is resistant to heat and drying, able to survive undetected on the skin and even inanimate objects, like clothing.1

The good news is that having an abnormal Pap smear result does not mean that you WILL develop cancer. The even better news is that in about 90% of people the HPV infection will clear on its own within two years. Only in a small number of cases does the virus persist and if left undetected and untreated, may lead to cervical cancer. By having regular Pap smears abnormal cell changes can be detected, monitored and treated if necessary thereby preventing cancer. 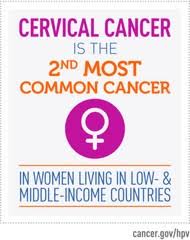 It couldn’t happen to me…

Like Davina, 43, you may be one of the many women who believed that they do not need to have Pap smears. However, in 2013 she was diagnosed with stage IIIB cervical cancer, by which time the cancer has spread to her pelvic wall. She had to undergo both chemo and radiation therapy, which she describes as “agonising on both a physical and emotional level.” Doctors estimated that she had developed the cancer ten years earlier. At the time she had no symptoms and was seeing an alternative health practitioner, who did not recommend going for a Pap smear. “I wish that he had encouraged me to have a Pap smear, because it is a hectic journey to have taken just because I didn’t go for a simple test”.

Worldwide, cervical cancer kills one women every two minutes and is the second biggest cause of female cancer mortality. It is the “number 1 ranked cancer in women aged 15 to 44 in Southern Africa and one of the leading female cancer death causes in South Africa”.

A study done by the University of Maryland School of Medicine shows that about four out of ten lesbians are not regularly screened for cervical cancer. We don’t have similar statistical studies in South Africa but a Womyn2Womyn.co.za2 poll showed that 56% of women had never gone for a Pap smear and 12% had “gone once years ago”. It seems that South African lesbians are equally, if not more, inclined to avoid regular Pap Smears.

Who needs to have Pap smears?

The bottom line is that “if you have a cervix, regardless of your sexual orientation or gender presentation, you need a Pap smear”. Even in women who have never had sex with men, the rate of cervical abnormalities is very similar to that of heterosexual women.

The South African national policy on cervical screening allows for three smears in a woman’s lifetime taken at 10 year intervals from 30 years of age.

The South African HPV Advisory Board recommends that your first Pap smear should be at 21 or within three years of the onset of sexual activity. “Thereafter smears should be taken annually until age 30, then every three years, concluding the screening at age 65–70 years for those women who have had persistent normal smears.”

Transgender men (transsexuals who have changed their gender from female to male) may be told that they are not at risk however this is not correct. According to a recent campaign in Ontario, Canada that is promoting Pap testing for transgender men, “If you are a trans man and you’ve had sex with men, women, and/or trans people, you can get cervical cancer. Trans guys who have cervixes- of all ages, races, cultures, classes and sexual orientations are at risk of cervical cancer.” Transmen are sometimes told that only if they still have a cervix do they need to have regular tests, however according to Check It Out,Guys , “Even trans men who have had complete hysterectomies, including removal of the cervix, may still need ‘cuff’ or ‘vault’ smears, which use cell samples taken from high in the vagina.” Transgender women who have neovaginas (a surgically-created vagina) don’t need Pap smears.

“I’ve always been more like ‘one of the guys’, so I felt ‘women’s issues’ weren’t relevant for me. ” says Alex, 34, a self- identified lesbian in an 11 year relationship. She admits that she has never had a pap smear and believed that you only need one “when you are over 45, sexually active with men, or if you have had children.” Like many of us she feels shy and reluctant to be “probed down there”.

Sharon Ludwig, Health and Support Services Manager at Triangle Project in Cape Town, says that not only is there a lack of knowledge around lesbian sexual health and misconceptions about what risks apply to us but “we live in a heteronormative society, so the assumption when we walk into a doctor’s office is that we are heterosexual. For this reason there is a “coming out” that generally is forced upon lesbians when undertaking health screenings of this nature”.

Last, but not least, she quips “there is a general dislike for that pesky little speculum” and fear around what happens during a Pap smear test.

So what really happens during a Pap smear?

A Pap smear is a screening test that looks for changes in the cells of your cervix (located at the top of your vagina), that could indicate a precancerous condition or cervical cancer. If changes to these cells are found before other symptoms occur, cervical cancer can most often be prevented.

An instrument called a speculum is placed inside your vagina in order to open it slightly. A tiny amount of tissue is removed by using a small cotton swab. This only takes a few seconds. The cells are then sent to a laboratory to be analysed.

Remember that you don’t have to be alone when you have your Pap smear. You can request that your partner or a close friend be in the room with you.

Amy, 48, has been in a long-term relationship with her wife Wendy. Prior to this she had a few relationships with other women (some of whom had been bi-sexual) and she had experimented with men during her teens. Although she didn’t regard herself as falling into a high-risk category she did go for regular Pap smears. She was fortunate to have a wonderful women GP that made having the test a breeze. In 2013 her Pap smear result came back as positive for HPV and she was referred to a Gynaecological Oncologist. Initially, she was uncomfortable with the idea of seeing a male doctor, “but he was so gentle and respectful that I realised that his gender didn’t matter” says Amy. After doing a colposcopy (a simple procedure similar to a Pap smear, which enables your gynaecologist to examine your cervix) he confirmed that the abnormal cells should be removed. This was done under general anaesthetic and took less than half an hour, using a procedure known as LLETZ (Large loop excision of the transformation zone). Amy says “It wasn’t actually painful at all, although I did have some bleeding for while afterwards.” A biopsy of the tissue taken showed that there were no cancerous cells and six months later her Pap smear was clear with no sign of HPV or abnormal cells.

It would be splendid if all cases could end like this, but regrettably as with Davina they don’t. Her message to all women is, “Please, don’t postpone going. Pap smears should be regular part of your health care and if your practitioner doesn’t suggest one, take responsibility for your own life and ask for one.” Ultimately, the onus is on all of us as women, regardless of our sexual orientation, to be accountable for our own sexual health and to bring lesbian health issues into the public eye.

“Our wonderfully caring and experienced doctor runs a medical clinic most Tuesday evenings from 6pm. Appointments can be arranged during operating hours from Mondays to Fridays either by contacting health2@triangle.org.za or by calling 021 686 1475.”

Pap smears are available at both Triangle women’s clinic and general medical clinic.  The women’s clinic is staffed by a female doctor and the general clinic by a male doctor.   Call Heather on 021 686 1475 for an appointment. For those who are employed, the cost of the consultation and Pap smear is R90.00. If you are unemployed, or earn less than R2000.00 there is no charge.

OUT provides direct health services to the lesbian, gay, bisexual and transgender (LGBT) community including HIV testing, counselling, treatment and general lifestyle advice and support. OUT currently does not do Pap smears. They refer to a gynaecologist, GP or local clinic.